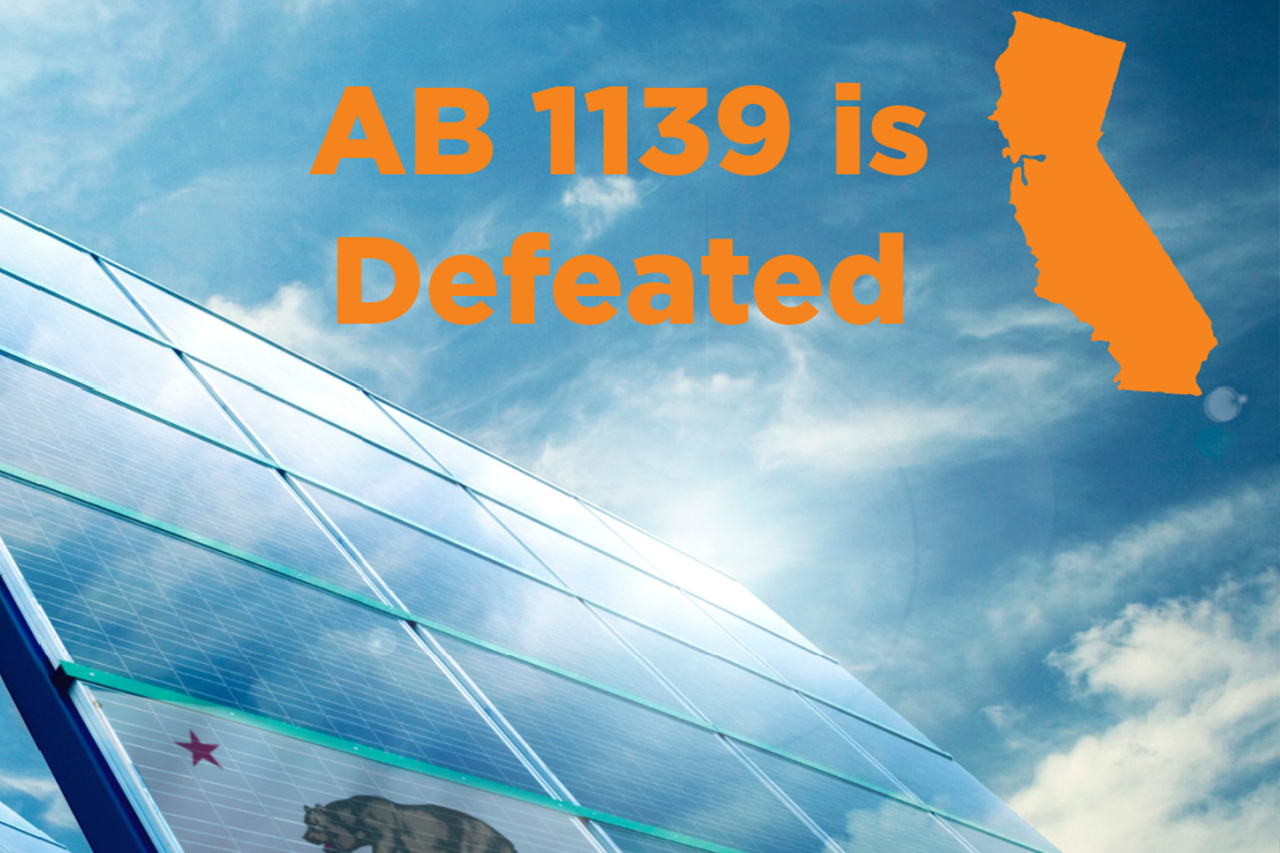 Californians have breathing space to develop and grow renewable energy with the new win in the California Assembly. The timely win came in the failure of the California state assembly to approve bill AB1139 on the 3rd of June 2021. Bill AB 1129 was designed to muzzle solar energy development by restricting California’s rooftop solar and energy storage market. The bill’s defeat heralds a new dawn where people are ready to champion renewable energy at all costs.

The AB 1139 christened “the Utility Profit Grab” bill was ordered to inactive file at the request of Assembly Member Lorena Gonzalez, chair of the influential appropriations committee, who authored the bill. Making the bill an inactive file effectively kills the bill until it is tabled in the assembly next year. The assembly person ordered the bill ineffective after it failed to garner the 41 requisite votes that would need to pass the bill to law. The failure was due to a robust effort by a grassroots coalition and citizen push against giant cooperation who pushed their interest ahead of those of the public.

When you follow the money trail, you see that the law was pushed by huge money intent on making profits at the expense of clean energy. Luckily they failed to reach this goal, and the state of California is one again on its path to reaching 100% clean electricity by 2045. The bill would have levied fees and reduced credit to hundreds of thousands of consumers who sell their excess solar energy to the solar grid or their neighbors. At the moment, California is the leader in solar energy in the USA, and the bill would throw a spanner in the works making it more challenging to expand solar energy access to working and middle-class homes.

Pacific Gas and Electric Company (PG&E) sponsored the bill introduced by Lorena Gonzalez in the state assembly. It sailed in the appropriation and Utilities and Energy committees with 10 and 12 votes respectively out of the 16 possible votes. There is still a lot of ground to be covered as the bill received 27 votes,27 votes against, and 25 members absent, abstaining, or not present. With the CPUC expected to deliberate on the metering reforms before or around the same time, the state legislature reconvenes in 2022.

Passing the legislation would have set a major blow on California’s rooftop solar and energy by undercutting low and middle-income solar consumer’s access to the installation of cheap, clean, and reliable solar energy. First, it would have blocked the growth of local energy resources like rooftop solar and any small-scale energy storage at a critical period. There was also a plan to radically cut into bill credits rooftop solar customers receive for sending surplus green energy to the grid and also throw out the current California Public Utilities Commission protections for over a million existing net metering customers. Subsequent amendments of the bill removed any language that would have boosted rate discounts and any clean energy incentives for low-income consumers.

The bill would have removed the requirement in the Public Utilities Code 2827(b) to ensure renewable distributed generation keeps on growing sustainably. Such provisions undermine the role that rooftop solar and small-scale storage play in the attainment of 100% carbon-free energy. The setback in the bill makes it difficult to electrify cars and buildings with clean energy and may lead to soaring electricity costs. Rooftop solar is a timely solution for consumers to keep an emission-free power source amid widespread blackouts from traditional energy sources in California.

It is mind-bending that legislators would even consider legislation that undermines the spread of renewable distributed generation. The bill would have had the most harm to low and moderate-income consumers and renters who’ve been adopting rooftop solar in great numbers in recent years. Lawrence Berkeley national laboratories estimate that at least 39% of the residential dollar installations were in low earning homes with those incomes equivalent to or below 120% of the Median area income.

The new proposals were meant to increase the electricity cost on low-income homes, reduce access to clean energy, and create a disparity between the rich and the poor. It is great that the citizens worked hard to get their voices heard and stopped the state legislators in their tracks from sliding the state back in terms of rooftop solar and clean energy in general.

Solar energy has lots of support in the state; as a result, thousands of people, solar consumers, and environmental leaders contacted their legislators to defeat the bill in the assembly. The rooftop solar project presents huge benefits to the average Californians, such as great jobs, clean and reliable energy for communities all over the golden state. There was a lot of mobilization in phone calls, financial donations, videos, social media posts, and the momentous solar truck motorcade around the state capital. It was a really coordinated effort from the citizens, environmentalists, and activists.

Now that the AB 1139 Utility Profit-Grab Bill Defeated has been defeated, it is time for everyone to revamp efforts to expand solar energy. Consumers should focus on installing new solar panels and ensuring the policies of AB 1139 do not come back in a new policy. Sadly, California Public Utilities Commission is considering reenacting some changes contemplated in the bill AB 1139. Members of the public can sign a petition to governor Gavin Newsom and the commission to secure a great solar future for California.

Everyone should celebrate the fact that AB 1139 has been defeated because rooftop solar has many benefits to the residents of California and the entire globe. Solar panels are cheaper compared to commercial solar panels by almost 20%. Installing solar panels can help attain grid parity quickly, especially in low-income neighborhoods. The cost savings are in terms of acquisition costs and energy saving from reduced energy cost. In fact, some Californian households experienced power surpluses and, in turn, shared the excess power to the neighbors and the state grid.

Energy generated from rooftop solar is relatively secure compared to the traditional source of energy. The use of rooftop solar eliminates the many power outages that come from traditional power generation and distribution, giving low-income households a better chance of eliminating the pesky utility bills or high maintenance costs.

Perhaps the most significant reason everyone should rally behind solar energy is the way it helps reduce the carbon footprint compared to conventional sources of energy. It relies on the energy of the sun; hence it poses the least risks to the environment. The effects of clean and green energy ensure we can leave sustainably and keep the planet sustainable for the next generation.

Its sustainability and low maintenance cost have made it a go-to source of energy for homes and hence helped spread carbon-free energy source, especially in the Golden State. There has been increased access to energy due to its continued adoption. Topdot solar has been a partner in all this journey of increasing solar coverage.Topdot Solar can make the homeowner’s needs for solar a reality in this ever-changing energy-reliant world where renewable energy is making a major shift away from fossil fuels. We should support such effort should be lauded and supported for a more inclusive planet.